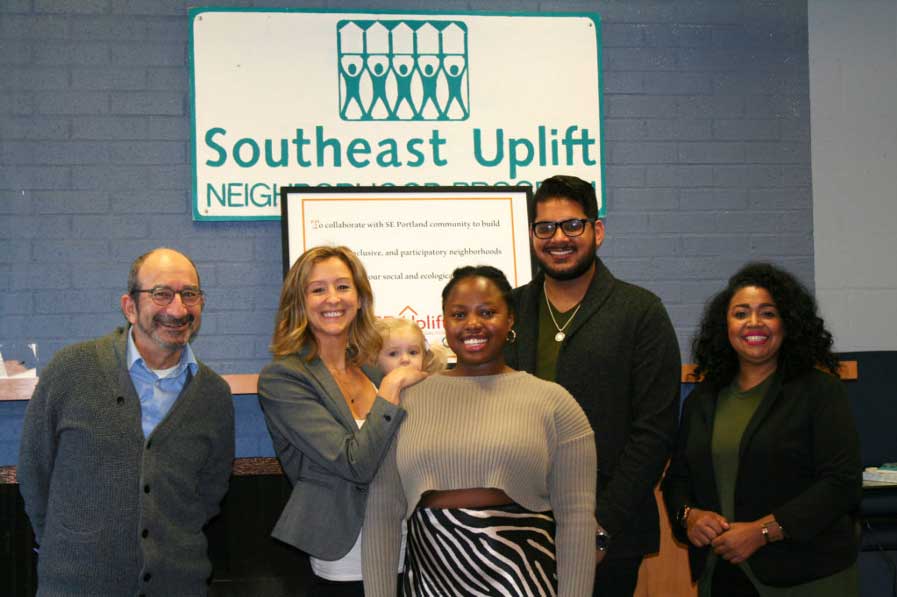 Southeast Uplift (SEUL) is a great neighborhood nonprofit organization that helps the communities in SE Portland with clean-ups, small grants, land use issues and grass roots democracy with a strong focus on diversity and inclusion.  This summer they were faced, on short notice with the unexpected loss of their executive director.  Their executive board contacted Page 2 Partners and after meeting the board and staff I was hired at the interim director.

At the outset I was faced with a number of problems:  Loss of the executive director as well as another staff member had left the month before. Another key staff member had a good offer to leave and join PBOT.  On top of this leadership crisis there was a very difficult and potentially divisive political issue from the City of Portland. The 3.96 Code Change was an attempt by the city to diversify funding recipients and could potentially threaten SEUL’s largest funder.

Sitting down with staff and the board we worked out a plan to combine some of the jobs. Instead of hiring a new staff member, we re-assigned those job tasks and used those funds to retain the staff member who was leaving and giving small raises to the remaining staff.  The ended up as being budget neutral and was a big morale boost at a difficult time for the SEUL team.

The code change issue was more difficult as it has underlying issues involving years of racial inequity funding from the City of Portland.  There was no easy solution to this problem and in fact as of this writing the City is still wrestling with this problem.   However, there was good and difficult dialogue with board and staff and a raised awareness of the inherent racism and bias in funding.  My job in this case was not to solve this problem in my short time there but to make sure our diverse staff was heard and that the problems were addressed.

I also worked hard to create clear and accurate communication between staff and board.  I did this by making sure staff issues were aired at the board level and that the board had a good understanding of what staff was doing. This seem simple but it continues to surprise me how often this is a problem.

I also instituted a short silent meditation (five minutes) before some staff and board meetings.  It is quite amazing how effective this is for calming things down.

After almost five months on the job the board was able to find and hire a great new executive director to take my place.  We had a pretty seamless transition as I spent a week with him reviewing the job, meeting with the executive board and staff and showing him the “secret handshakes”!  He has now been on the job a month and seems to be off to a great start.

I continue to be convinced that hiring an interim executive director is a very smart move for a nonprofit.  It both gives them time to assess what is needed and get an outside assessment of what the organization needs. It was a privilege for me to work for such a great organization and feel that I had made a small contribution to their important work.

“I can’t imagine anyone else could’ve handled our transition better than Danny. He concluded with a successful onboarding and left the organization in a better position he found it.”   Tina Kimmey, Board Chair SE Uplift

If you’ve ever applied for a job, you understand how stressful the entire process can be. That alone should be incentive enough to treat everyone applying for a position with respect and dignity. But it is also a reflection of your organization and what your values are.

Hiring and on-boarding a new ED in this virtual world of work?? No way! Here’s how we did it and you can too.

Our Executive Director left us with three weeks notice!! What do we do?

The unexpected departure of your executive director can leave an organization scrambling. Here are some things you can do to get started on navigating the transition.

You Are a Master of Resilience

How do we build resilience during a crisis. This article offers some suggestions for working with your team to weather this crisis and come out stronger on the other side.

Send us a Note

Thank you! Your submission has been received!
Oops! Something went wrong while submitting the form.